The G1 by Galaxy is modeled after the Colt 25. It’s tiny build makes it ideal for being used as a pocket pistol or in CQB. 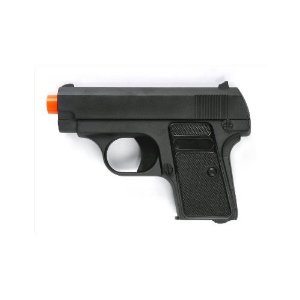 The first thing you’ll notice about the G1 is its size. It measures roughly 5-1/2 inches long and 3-3/4 inches high! This makes it perfect to slip into your pocket. Some people use it as a third gun (if you get captured in a airsoft battle and are forced to give up your primary and secondary, you can hide the G1 in your pocket and when your captors have their backs turned you can whip this out and try to make an escape). The G1’s size also makes it ideal for CQB (Close Quarter Battle) and maneuvering around corners and obstacles.

The G1 is probably best used as a “third gun” or a back up to your secondary because of its small, inaccurate design. It can shoot accurately at short ranges (15-20ft), but is inaccurate at anything more. Using .20 gram BBs will make it much more accurate, but it still is unpredictable at ranges over 30ft.

It shoots 240 FPS, which, for a pistol of this size, is pretty decent.

A down side is that it has no safety. This means, for safety reasons, you shouldn’t keep a round in the chamber until the moment you’re ready to shoot. The down side is, since you don’t already have a round in the chamber, you have to cock it back first. It takes about 3 seconds to cock the slide and get your sights on target, which is plenty of time for an enemy airsofter to see you and shoot you.

The magazine on the G1 only holds 8 rounds and finding spare mags are nearly impossible. But, again, the main purpose of the G1 is to fall back on and give you the chance to try to make a escape when your primary/secondary has been captured, ran out of ammo, or malfunctioned.

The sights are pretty bad, but like I said above, it should mainly only be used to buy time in a airsoft battle.

Though, the G1 is made almost entirely of metal (technically it’s called “Zinc Alloy”, but it feels a lot like metal) with the exceptions of the magazine and grips. This gives the gun a really good feel and makes it exceptionally durable.

To wrap thing up, the Galaxy G1 is a okay little pistol, the main attraction being that it’s so small. I recommend that it only be used as a fall back in a airsoft war when your other two guns fail. As for target shooting, it’s a fun gun to shoot, but just know that you won’t be hitting the target a lot of the time. But, if you want a tiny little gun that has relatively good FPS and feels nice and solid, this might be the one for you.