Crosman Nitro Lubricating Oil spays directly down the barrel of a airsoft gun and acts like WD40: helping decrease friction on the BB and increase velocity. 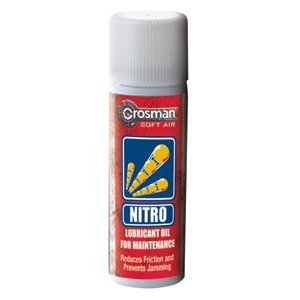 The saying “A little bit goes a long way,” is definitely applies when using Crosman Nitro Lubricant. If you spray too much then it can clog your gun and dramatically decrease BB velocity. And it’s also near impossible to remove once it’s inside the barrel, so just try to use a little bit at a time.

I personally accidentally sprayed too much into my Stinger P9, which before could hit targets from over 40 feet away with extreme accuracy, but will now only fire BBs 15 feet before they drop to the ground. I’ve tried multiple times to clean the barrel out with a cleaning rod to no effect. Like I said before, just use a little bit at a time (any more than a 2 second burst is too much).

Crosman says that for the first 100 shots after you’ve applied the Nitro Lube your gun will have decreased power and accuracy, but, in my experience, it usually takes a good 200 to 300 shots to fully regain the original power and accuracy. It’s not a huge deal, but immediately after you’ve used the Nitro Lube and cleaned out the extra residue, you should go out and stand about five feet away from your target and just unload the 200-300 shots to get your gun back to normal. This way, if the next day you want to go shoot, you can just start shooting like normal instead of having to shoot 300 breaking-in rounds.

Even after the first 200-300 shots, when you’ve regained the accuracy and power, there’s not much of a difference in velocity. In fact, if you test fired your gun before using the Nitro Lube, then test fired after you used the Nirto Lube (and fired the first 200-300 breaking-in shots), you really wouldn’t even be able to tell a difference. However, it does decrease jamming and help protect the barrel and prolong the guns overall life expectancy.

In a wrap, Crosman Nirto Lubricant won’t do much to increase velocity, but it can help protect your gun and prevent jamming. If you have a gun that’s already running well, then you might not want to risk accidentally spraying in too much lube and clogging your gun. But, for the $5 it costs, Crosman Nitro Lube can be a good investment to protect your gun in the long run or fix it if it’s prone to jamming; just don’t use too much!