The Tapco T6 Butt-Pad attaches to the butt of most M4s with adjustable stocks, compatible with both airsoft rifles and real ones. 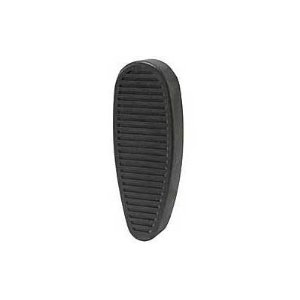 The T6 Butt-Pad pops right onto most M4 style rifles with adjustable/collapsible stocks without any glue, tape, or any other bonding agent. It also pops right back off very easily if you pull on it, but it’s still snug enough that it won’t fall off in the middle of shooting. To give you an example of what type of stock works best, the T6 fits perfectly onto my personal JG M4 2010 Upgraded Version as well as the Crosman Stinger R34 airsoft rifles.

The T6 definitely helps the butt of your gun to stay up on your shoulder, especially if you’re wearing a backpack or a vest where there’s a strap right where the stock rests. It also takes off some of the impact that your shoulder gets from recoil on real guns.

The T6 also adds a full inch the the length of your gun, which can be both good and bad. If you have longer arms, you might benefit from the extra length. But if you already have your stock at a perfect length, the extension might make your rifle feel awkward. Although, truthfully, an extra inch doesn’t make that big of a difference on my personal airsoft rifles, and, besides, the T6 only fits onto adjustable stocks like I’ve mentioned, so you should be able to just adjust your stock an inch inward if you really don’t like the extra length.

It’s also extremely durable. It’s made fully of rubber, and can hold up to just about any climate or terrain you can throw at it.

In a wrap, the Tapco T6 Butt-Pad is a durable and cheap attachment for any M4. It works with both airsoft and real firearms and keeps your rifle up on your shoulder. The only down-side is the extra length, which isn’t even that big of a deal.

The JG M4 airsoft rifle is one of the most popular airsoft AEGs on the market. It’s battery powered and has full and semi-automatic firing modes. It’s also almost completely metal making it feel sturdy and durable.

One of the first things you notice about the JG M4 is the Weaver rails. As you can see in the picture above, there’s a rail that runs along the whole top of the gun as well as one on the bottom. It also comes with two smaller rails that are meant for the sling mount, but you can place on either side of the hand guard and use for mounting accessories. The iron sights are also folding, so that you can have a unobstructed view of a scope or sight. It comes, like I mentioned, with sling mounts, too, that you can install and uninstall with a couple screws. And being built around the M4 design makes it compatible with most M16/M4 airsoft magazines and accessories.

You can also upgrade it internally. It comes with instructions on how to disassemble it so that you can easily upgrade springs, gears, etc.

The JG M4 shoots .20 gram BB’s at a blistering 420 Feet Per Second (542 FPS with .12 grams). That’s about as high as you can get from a AEG without modifying it. From 50 feet away you can shoot right through a Crosman Gel-Target. This makes target shooting a lot of fun, but it might hurt a little too much for a friendly backyard skirmish. Plus, most airsoft fields won’t allow guns over 400 FPS.

The accuracy is also very good. Right out of the box you can easily hit a person-sized target from over 90 feet away. You can also adjust the front sight, back sight, and the hop-up to make it even more accurate.

There are a lot of moving parts on the JG M4 which adds to the realism. When you pull back the charging handle a dirt-flap springs open and reveals a wheel to adjust the hop-up. And there’s also a “front aim assist” button on the right side of the gun that you can press in. On a real gun this would help unjam bullets,  but, on this airsoft version, it doesn’t do anything and is just for decoration.

But even when you do get the battery in, it drains very quickly. Within three or four magazines, you need to recharge again.

The magazines themselves are basically just like any other AEG magazine. You pour the BB’s into the top of the magazine and then wind a wheel on the very bottom to get the BB’s to feed into the gun. Although, they only hold 300 rounds, which isn’t a lot when you’re shooting on the fully-automatic setting. But, like I said before, the JG M4 is compatible with most M16/M4 magazines, so you can buy spares.

The last thing worth noting is the Rate of Fire. On the fully-automatic setting it honestly doesn’t shoot that fast (maybe about 500-600 RPM on a good day). It doesn’t shoot slow by any standard, but my $99 Crosman Pulse R76 out shoots it considerably.

Overall, the JG M4 S-System airsoft rifle is pretty nice AEG, with one of the highest velocities that you can get. It’s fully customizable with tons of Weaver rails, as well as upgradable internally. The ROF is fairly low, but the accuracy, velocity, and durable metal build more than make up for it.