You can’t have a gun without ammo. You can’t have a airsoft gun without BBs. It just won’t work. That’s why the biggest hassle in any gun fight is reloading. In this post I’m going to show you how to get more shots per clip, which may not sound like a big deal, but when a friendly airsoft fight turns into a war, a couple extra shots can kill/tag a couple guys on the opposing team. Think about that, less players shooting at you, that’s a pretty big deal. Find your type of gun below, and get your guns locked and completely loaded.

AEG’s usually have big reservoirs that are pushed into the chamber via spring that you crank by turning the wheel on the bottom of the magazine. Take a completely empty magazine, and fill up the reservoir just like you normally would. Now I know that you’re suppose to put the magazine into the gun and then crank the wheel, but this time crank the wheel on the bottom of your magazine just until the BBs reach the top of the chamber. Then open up the reservoir again and there should be room for at least five more BBs if not more. Fill the space up, and then insert the fully loaded magazine into your gun and then crank the wheel all the way taught. This has now given you a average of 10 more BBs in your magazine.

Unfortunately, there’s not much extra room in pistols/shotguns/sniper-rifles magazines for extra BBs due to their slim, tidy design. However, you can add just one more shot. How you do it is, take a empty magazine from your gun. Then load it with just one BB. Now insert the magazine with the one BB in it into your gun. Now simply cock your gun just like you would to get one in the chamber. Then take the magazine back out and it should be empty. Now fill the magazine up just like you normally would and insert it into the gun. The single BB you loaded earlier is now in the chamber, giving you a extra shot. Just be careful to keep the gun on safety until you’re ready to fire because as soon as you pull the trigger, it’s loaded and will fire.

Gravity fed hoppers are the most simple design out there, making it the hardest to manipulate. Basically, BBs are stored above the chamber, usually in a scope or a compartment. To juice some extra rounds out of these you’ve got to get creative. What you need to do is take a piece of construction paper and roll it into a giant straw thing and tape it so it wont unroll, make it just small enough to fit into the hole where you pour BBs into to fill up the scope/compartment. Shove it into the hole about a half inch in and tape it into place so it wont fall off. Now fill it up with BBs so it fills the compartment and the funnel you made up to the top. It might look ridicules, but it gives you a average of 50+ extra BBs. This is to give you a idea of what it would look like if you cut your gun right down the middle with your funnel inserted:

All spring rifles have different magazines, which makes explaining this part hard. There’s some guns were you have no room to “top off” (I’ll show you how to top off in a moment), and for those guns (a example is the Mossberg M590 shotgun from Soft-Air USA), the only thing you could do to get as much ammo as possible is to “get one in the chamber”. Scroll up to “Spring Pistols, Shotguns, and Sniper Rifles” to learn how to get one in the chamber, it’s the exact same concept. But some rifles (the Stinger R34 from Crosman, for example) has a little more room to work with. To give you a idea of what kinds of magazines can top off, take a look at the picture below. You need one like that, with the outward notch:

The notch usually isn’t that dramatic, but the bigger it is, the more ammo it’ll hold. On magazines like this you usually pull a spring down on the front of the magazine and you usually lock it into place some how, then you either pour the BBs in from the notch, or if you have a reservoir that you shake to make the BBs fall in from the reservoir.  As seen below, the BBs fall into a sort of chamber in the magazine. The BBs don’t take up that whole chamber, the notch up on top is empty, so you can just manually drop a couple BBs on top of the others. A idea of what you’re seeing below is the “before” is a normally loaded magazine. The “after” is a normally loaded magazine with three extra BBs on top (the extra BBs are shown in red): 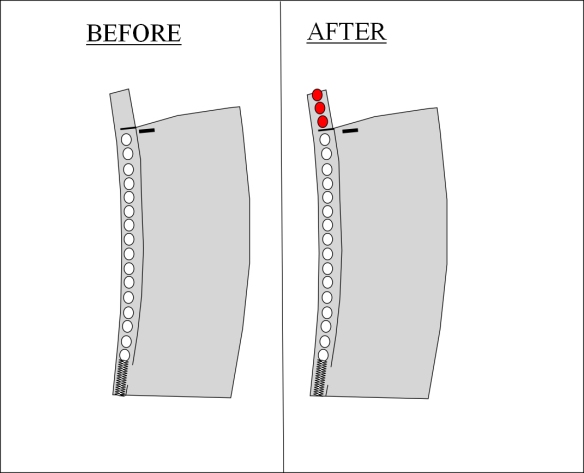 Just make sure to keep the magazine up right while you insert it into your gun becuase the BBs on top are loose and could fall.

That’s about all the different ways you can extend your BB count. While these methods do take longer to load than just a regular load, you never know, maybe those few extra BBs might save your hide and keep you in the game.