Airsoft is as close to real combat you can get, without putting your life in peril. Airsoft is usually a team sport, and people of all ages everywhere are getting in on the action. The whole point is: take out the enemy and don’t get shot doing it. The rules are different everywhere, and depending on how many people are playing, the rules can vary from all out war, to if you get hit you must sit out for the rest of the round until a team has won, to capture the flag, to just friendly backyard skirmishes. There’s almost infinite ways to play, and there’s not a right or a wrong way.

The most important and most basic thing you need for airsofting is a airsoft gun. Basically how a airsoft gun works is, in some fashion, a spring is compressed along with a little pocket of air, which propels a BB (BBs are small plastic spheres that airsoft guns shoot. They usually have a diameter of 6mm, so they’re pretty small).  There’s several different types of guns, here’s a little list of the three different types:

AEG (Automatic Electric Gun) – This is battery powered. You must charge a 7-12 (sometimes greater) volt battery and hook it up to the gun to give it power. As far as batteries go, there’s two measurements that come into play: Volts – volts measure how powerful the battery is, the more volts, the faster a gun will shoot, and also the higher rate of fire and velocity there will be (even a small upgrade in battery can dramatically improve a gun). The only down side is that if you have to strong of a battery, it might overwhelm the gun and break it. The second measurement is mAh – this is how much power a battery can store. For example, a 1200 mAh battery can last a (let’s say) 10 hour battle; a 1800 mAh battery can last a 14 hour battle. That’s just some basic examples of different battery terminology.

The upside of an AEG is that it is usually fully automatic, which means with a single pull of the trigger multiple BB’s can be fired. AEG’s are the most popular type of airsoft gun for fights because of this. Out shooting the enemy is the biggest advantage you can have in any kind of gun fight. AEG’s usually have relatively good FPS (feet per second; I’ll talk about FPS later) which is also a benefit.

Spring/Bolt Action – Spring/Bolt Action powered means you must cock something back before each shot. On pistols you usually cock the slide back, rifles usually have a charging handle on the top or on the side, and revolvers you must cock the hammer back. Either way, what it does is compress a spring and capture air that will then help propel the BB. This type of gun is the most common type because of its simplicity, cheapness, and because it will fire under extreme heat/coldness where the batteries inside AEG’s or the CO2 inside Gas Powered guns might fail in extreme weather. You can even get spring guns wet and muddy and they still will fire (although, you should clean and dry them if they get wet because the springs will rust). But, as stated before, spring powered guns require you cock back the slide/cocking mechanism which make them slow to shoot, so they just can’t compete with AEG’s and Gas Powered guns.

Bolt action is the same thing as spring powered; basically you compress a spring to shoot the BB, it’s just in a different form. With bolt action, you take a handle and rack it back then forward again to compress the spring and get a BB in the chamber, exactly as you would with real guns (except with real bullets, also). But bolt action can compress stronger springs which results in higher FPS. This is why bolt action is almost exclusively used on sniper rifles. If you’re confused, the main difference is that with bolt action you pull a big bolt back, and with spring action you simply rack a charging handle. But, bolt can produce higher FPS than spring. 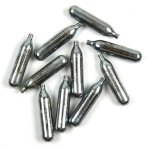 An example of CO2 power outlets

Since CO2/Green Gas is doing the work instead of springs (AEG’s and Spring/Bolt Action require springs to work), the BB can be shot at much higher velocities (C02 and Green Gas still use springs, they’re just not so vital). And like AEG’s, you don’t have to cock back each time which means you can fire as fast as you can pull the trigger. Usually Co2/Green Gas are only semi-automatic which means with every pull of the trigger one shot is fired, but there are a handful of fully-automatic Co2/Green Gas out there. Fully-automatic means with one pull of the trigger, multiple BBs can be fired.

Now for some terms you hear a lot in airsoft:

AEG’s – usually have both fully and semi-automatic features
Spring/Bolt Action – neither; you must manually pull some sort of charging lever back before each shot
Co2/Green Gas – Usually semi-automatic only. Although, there are a couple of fully-automatic models out there

Now, for those who are completely new to airsoft or any type of gun, what the “safety” feature is. Every gun has safety, every single type and model; it is both unsafe and illegal to have a firearm without a working safety. A safety locks the trigger into place, so that a gun won’t go off by bumping into things. When a working safety is on, it is impossible to discharge the gun. It’s just that simple. Every airsofter (and firearm owner, for that matter) must always have their gun on safety when not in use.

There’s also a couple different types of “Blow-back” airsoft guns. Blow-back just means that when you fire the gun, the slide will blow back, just like a real gun. Blow-back airsoft guns can be Co2 or Electric (AEG). The benefits to a blow-back gun is that it looks realistic, and it chambers a BB each shot, so that it shoots as

fast as you can pull the trigger, unless it’s fully-automatic, which would basically make it a blow-back AEG. GBB (Gas Blow-Back) is basically a Co2 powered blow-back airsoft gun. EGG (Electric Blow-Back) is a Electric powered blow-back (although electric powered blow-backs are pretty rare, and usually have horrible FPS and accuracy. So, chances are that you’ll never really hear the term “EGG”). The down side of a blow-back airsoft gun, while it’s semi or fully-automatic, it costs much more money than a Co2 or AEG, plus Co2’s and AEG’s already are semi/fully-auto. And, since the slide comes back, it drains batteries and Co2 cartridges much faster than normal. So really, blow-backs just look cool.

Another term you might hear in airsoft is “CQB”. All that stands for is “Close Quarter Battle”. Basically, all that means if a gun is good for CQB, is that it’s good for close-up fighting (usually 20 feet or under). Another way you might hear CQB is a type of game mode. It’s the same thing, any shooting taking place when your target is 20 feet or closer; most of the time CQB is indoors, just because indoors are usually smaller spaces, but it can also be outdoors. Lower FPS guns are best for Close Quarter Battle, because higher FPS guns hurt to much at short range.

FPS (Feet Per Second) is a measurement used to describe how fast the BB will be traveling as it leaves the barrel. For example, if a airsoft gun has a label “375 FPS” it means when the BB exits the barrel of the gun, it will be traveling 375 feet per second. This can be calculated to better understand it to 256 Miles Per Hour. So, 375 FPS = 256 MPH. This may seem fast, but keep in mind this is barrel velocity. As soon as the BB leaves the barrel it starts slowing down. It will lose at least 25% of its speed by the time the BB actually gets to your target. Also, manufactures try to look better by trying to get the highest FPS out of their gun; so what they do is take a .12 gram BB and calculate how fast a .12 gram BB (we’ll get to what the ‘grams’ matter in a moment) is traveling right as it leaves the barrel. The bottom line is, when you’re looking at a gun’s FPS, take at least 75 off of it right away. The manufacturer’s FPS is always higher than the real thing. The effect of FPS in the field is, the higher the FPS, the faster the BB will go, the more accurate it will be, and the longer it will travel.

Now for what “grams” mean. A gram is a measurement of weight. Obviously a .12 gram BB will be lighter than a .20 gram; a .20 gram will be lighter than a .25 gram, etc. The weight of standard airsoft BB’s are from .12-.45 gram weight. The heavier the weight, the more accurate. That’s why most players use .20 and up for almost every gun. The drawback of a heavier BB is that it will dramatically decrease the FPS. Usually the general rule of thumb is, the higher the FPS, the higher gram BB you should use. 200 FPS and under is best with .12 gram; 200-400 = .20 gram; etc. Also, guns with their hop-up wound to lose should use a higher gram BB (Hop-Up, I’ll explain next). Or if the gun is fully-automatic then you should use almost strictly .20 gram because anything less/more could jam. So, you should weigh out the accuracy to power ratio to find the best weight BB for your gun.

And now for hop-up. Almost every gun has it now. Hop-Up puts a back spin on your BB, making it more accurate, and a whole lot better distance. At close range, hop-up can be annoying because the BB will tend to go upwards and be less accurate. But at long ranges, hop-up is vital, adding distance and accuracy. The “tighter” a hop-up is wound, the less backspin will be put on the BB. The “looser” the hop-up is wound the more backspin will be put on a BB. Looser = more hop-up, and the the BB will tend to float up after 50 feet. Tighter = less hop-up, and the BB will sink after about 50 feet. (When a BB will either float or sink [50 feet, 60 feet, 70 feet, etc.] depends on the velocity of your gun) If you’re target is 30 feet away you probably want less hop-up, and if your target is 70 feet away you want more hop-up. It all depends on the situation. All-and-all, hop-up is good.

A alternative to hop-up is BAXS. BAXS is relatively new to airsofters, and has gotten a so-so reception because of airsofters’ loyalty and comfort level with hop-up. BAXS is in no way bad, though. With hop-up there’s two points of contact on the BB while it’s in the chamber, the top and bottom. With BAXS there’s three points of contact, two on the top and one on the bottom. Basically, BAXS gives you more control over the BB, so instead of floating up or down after 50/60/70 feet, the BB will continue going straight. BAXS is mostly on cheaper guns because they tend to have less FPS and it would be inaccurate to have hop-up. Although, it’s not totally uncommon to have BAXS on higher end airsoft guns.

Well, that’s the end of the “crash-course” on airsoft. Congratulations on reading the whole thing. If you have any further questions regarding airsoft, email me at (sirbuffalosushi@gmail.com) or leave a comment.

(This is a posted copy of Airsofter United’s page, “Crash Course“)