At a glance, the Stinger R34 airsoft rifle is a almost exact replica of the standard M16. Everything from the magazine release to the sights are mirroring the M16. That’s not a bad thing, either. The Stinger R34 airsoft rifle is a very effective gun in both the field or for target shooting. The four weaver rails located near the front of the gun (as seen below) are extremely useful for mounting anything from scopes, to lasers, to fore grips, to even bi-pods. 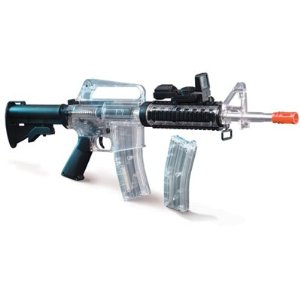 The Stinger R34 is also very accurate. Although the real M16 is mainly a infantry rifle, the Stinger R34 is commonly used as a sniper rifle. It can hit targets from 120 feet out consistently with .25 gram BB’s; before hard to come by, with the exception of sniper rifles.

A lot of airsoft players are drawn to not only it’s stunning accuracy and reliability, but it’s price tag of only $40.  Not bad for a gun of this caliber.

Also, the Stinger R34 has an edge by having a reservoir of 500+ BB’s in the magazine. That’s a huge deal to players who have day-long fights. Taking the hassle of having to reload manually every time out of the equation equals less down time between shots.

As with any airsoft gun, the Stinger R34 has its drawbacks. For example, the cocking mechanism is located directly behind the sights. This means that you either have to dismount each shot to rack it with your strong hand, or leave the rifle mounted on your shoulder and rack it with your weak hand. Either way is fine, it just slows down time between shots and gets you off target, and in a airsoft war, opportunity only comes once. Also, if you attach a sling, you have to attach one of the latches to the very back of the stock, which isn’t a big deal, it just feels weird and the sling can sometimes get wrapped around the stock.

And, even though the Stinger R34 is reliable for the most part, it does misfeed from time to time (a misfeed is when the gun doesn’t take a BB correctly, and it doesn’t fire a BB when you pull the trigger, it basically dry fires). Not a huge deal in target shooting, but when you need to make a shot count in a airsoft fight, you need to know that your gun is going to work. But don’t let this discourage you from getting the Singer R34, like I said, for the most part the Stinger R34 is very reliable, it can just misfeed every now and then.

It comes down to this, the Stinger R34 airsoft rifle is a great gun; reliable, accurate, powerful, and cheap. While it does have some designed problems, it’s a hybrid of sniper, infantry, and assault rifle all packed into one. Good for both beginners or  advanced airsofters.

Also, note that the Stinger R34 is NOT fully automatic. It does have two “fire” modes, but they’re just for looks. A lot of people get confused by the two firing modes, but I assure you, it’s a spring powered rifle that you must cock before each shot, regardless of what “mode” you’re on.

Specs:
Feet Per Second: 300
Accuracy: Can hit person from 120 feet
Power: Spring (you must pull back the slide before each shot)
Caliber: 6mm
Recommended BB Weight: .25 gram
Magazine Capacity: 18 BBs (with a 400 round reservoir)
Manufacture: Crosman